Origin
Light to vivid yellow diamonds are found in different countries, but the notably large and intense yellows have been discovered primarily in South Africa. These include the largest known canary diamond, the Red Cross, which was once presented to Christies on behalf of the British Red Cross Society. A rare feature of this stone is that a Maltese Cross is clearly visible in its top facet. Another famous yellow diamond discovered in South Africa is the Allnatt, a 100-carat fancy vivid canary yellow.

Record Breaker
The largest yellow diamond is a deep brownish yellow called the Incomparable. It is the third largest diamond in the world, weighing 407.48 carats and is also the world’s largest internally flawless diamond. It was originally discovered by a young girl playing in a pile of rubble in the town of Mbuji Mayi in the Democratic Republic of Congo. 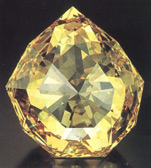 Thiscubic zirconium replica was designed and cut by Scott Sucher. Historical Trivia
Light yellow with a slight green undertone and weighing almost 140 carats in the rough, the Florentine diamond initially belonged to the Medicis, one of the most powerful families in Europe. After it changed hands in 1743, the Emperor Francis I wore the Florentine in his crown at his coronation. After the collapse of the Habsburg Empire in 1918, the stone accompanied the royal family into exile in Switzerland, but since then the diamond has vanished; nothing definite is known of its whereabouts.

Little known fact
The first diamond ever to be authenticated in Africa was the Eureka, a pale yellow stone weighing 10.7 carats. It was discovered in 1866 by the child of a Boer farmer, in a small hole probably made by a bushman digging for roots.

Use this space to save the products you like. To add a product here, simply click the icon.